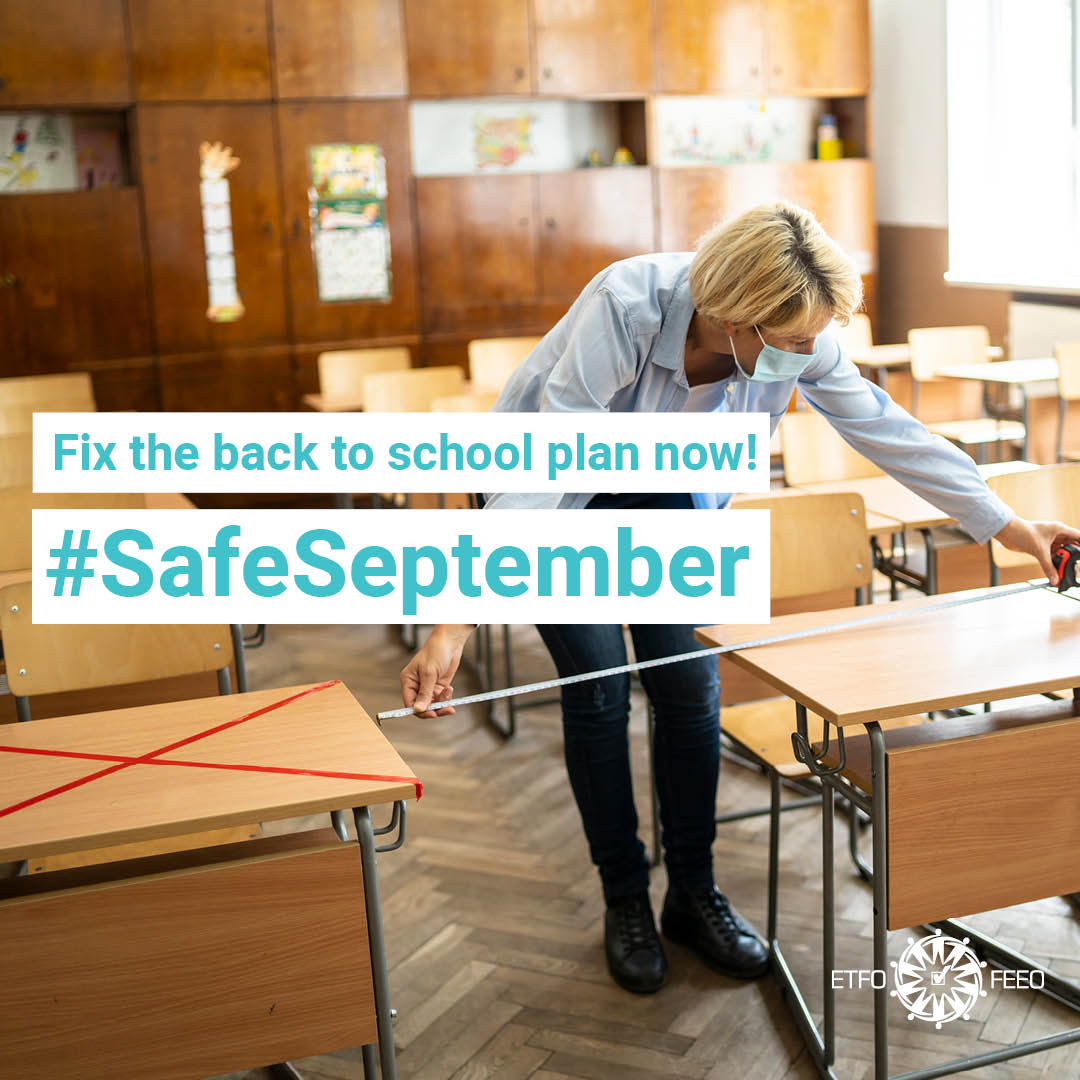 Ontarians are united in our anxiety about the return to school in a year like no other. Despite hopes for a safe September, many parents and education workers expect a second COVID-19 wave this fall, particularly because provincial plans for return to school are so haphazard and inadequate

Doug Ford learned a few things in the early days of the pandemic, appearing more practical and measured than after his election. His Conservative government was rewarded with higher polling numbers. Now, Ford is slipping back into his arrogant ways, attacking those, like teachers and other education workers, who stand up for public education and insist on protecting health and safety.

Education unions are united in their struggle to keep students and workers safe. Four Ontario teacher unions joined together to appeal to the OLRB, calling on the Ministry of Labour to respond to their requests for appropriate health and safety standards in schools. CUPE locals at Toronto and York Region school boards are running ads and letter writing campaigns, insisting that more funding be provided to ensure smaller classes and safer schools.

At the moment, there is no vaccine and no cure for COVID-19, so safety cannot be guaranteed. Even the best of plans are unlikely to prevent further outbreaks. Yet everyone knows that adhering to what we have learned from science – staying outside or having well-ventilated interiors, keeping two meters apart, wearing masks when that is not possible, keeping to small bubbles and cohorts, frequent cleaning and handwashing – will reduce outbreaks until we develop a vaccine, cure, or immunity. School boards and education workers have been clear that what is needed is smaller classes, more staff, fewer students on buses, masks everywhere, and stronger hygiene protocols.

Instead of putting the precautionary principle first, Ford deflects, doing as little as possible while pointing fingers everywhere but at himself and his government. As they did during the Harris years, Ontario’s Conservatives are centralizing power and decentralizing blame. Ford, Education Minister Stephen Lecce, Health Minister Christine Elliott, and Labour Minister Monte McNaughton first passed the buck to school boards, so the blame for anything that goes wrong can start at the board level.

Their next tactic is to attack teachers and their unions, demanding teachers “sacrifice” like other workers had during early days of COVID. Either way, it appears Ford asks teachers to unnecessarily risk illness for their students and communities, for themselves and their families. And in return for their sacrifice? Where there are outbreaks, expect teachers, and even parents to receive part of the blame.

It all shows a lack of respect for students, education workers, and anxious, frustrated parents unsure where the responsibility lies.

Meanwhile, boards have been scrambling to respond to delayed and frequently changing provincial plans and guidelines for school return under COVID. They are responding with different policies, for example the TDSB requires masks for all students, while at YRDSB they are mandatory for students in grades four and above. Schools and education workers and their unions are also trying to plan in what would already be tumultuous times, made much worse by uncertain provincial direction and lack of resources.

At the end of August, the province had announced about $900 million for COVID measures – but the majority of that comes from boards’ own reserves (often already spoken for) and most of the rest from the federal government. Very little has come from the province itself, which also sought to take credit for extra staff positions negotiated by CUPE last fall.

Class size is a key issue because with most classrooms, a full class denies two meter physical distancing. But class sizes have not been lowered or capped by the province. So financial pressures and the province’s broken funding formula will require school boards to collapse and combine classes when some students opt to learn online from home. And, in fact, the province decreed that one meter distance is enough in schools, counter to its two meter requirement for other physical locations.

Even the Globe and Mail says, “Governments need to listen to parents and teachers, and they must be ready to change course if conditions change, or new evidence emerges.”

Of course, even if we can force Ford, Lecce and Elliott to provide necessary leadership and funding to make this September as safe as possible, we recognize that the pandemic will still be here.

In these circumstances, the challenges are powerful for educating kids and maintaining good mental and physical health for students, their parents, education workers, and our communities. We already see parents’ anxious about sending kids back to school and worrying every day if they will return healthy or keeping them home with the related effects of isolation and impact on parents’ jobs.

Dealing with this anxiety, then with isolated cases of COVID-19, and ultimately preparing for a second wave that could re-close schools is already taking a toll. Adequate community and health supports, as well as empathetic, flexible employers and effective employment law will play a key role in weathering this pandemic and in achieving a just recovery for all.

Coming out of the pandemic we need a healthy public education system.

We know from a report commissioned by Ford’s Conservatives in 2018 (Ernst & Young’s Managing Transformation — A Modernization Action Plan forOntario) that business would love school charters and vouchers. We must guard against attempts to shift public education dollars into for-profit pockets.

After COVID, the public school funding formula will still be broken. This formula is what prevents most school boards and schools from shrinking class sizes during COVID-19, because provincial funding is largely based on the number of students in a classroom. It was broken by the Conservatives under Premier Mike Harris; it remained broken under Liberal leadership of Dalton McGuinty and Kathleen Wynne. Ford is trying to break it further.

Finally, we have all become much more aware of the second pandemic afflicting our society – racism. In order for our education system to welcome and include all, it needs to tackle racism, and in particular anti-Black and Indigenous racism.

It is time to have tangible, measurable and real action to dismantle anti-Black racism, anti-Indigenous racism and all other forms of systemic racism in our schools. Our Black and Indigenous students, parents, teachers, education workers and communities deserve better. In rethinking how our schools treat historically oppressed groups, we must consider curriculum, student surveillance and punishment, streaming, police in schools, and leadership at all levels to represent the communities our schools serve.

It is impossible to imagine achieving full equity and changing policies across economic, social and environmental policy without tackling and eradicating discrimination and racism in our education system.