Couriers Get Big Win at Labour Relations Board

Foodsters United and the Canadian Union of Postal Workers won a major victory at the Ontario Labour Relations Board on February 25th: Foodora couriers are now legally recognized as dependent contractors, which means they can unionize under Ontario’s Labour Relations Act. 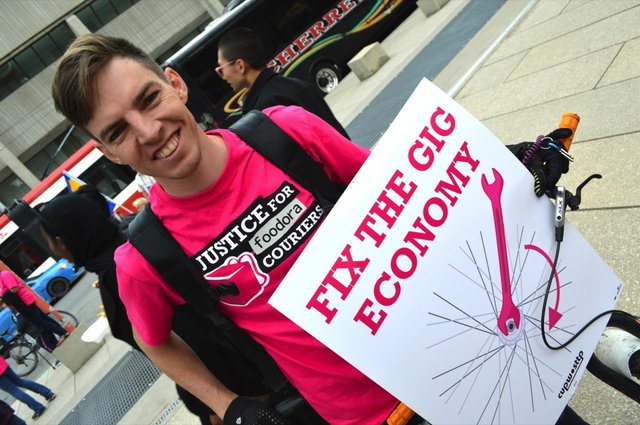 Until the Foodsters took their challenge to the OLRB, the employer had been misclassifying them as independent contractors.

“The OLRB’s ruling says doing business through a digital app is still business – and it relies on employment relationships,” said John Cartwright, Toronto & York Region Labour Council President. “In the gig economy, corporations might try to use ‘creative’ methods to shirk their responsibilities, but unions and workers will fight for respect and fair treatment.”

Corporations like Foodora and Uber are dragging us down a pathway that protects their enormous wealth at the expense of decent work and job security. They have created fissured workplaces through contracting, outsourcing, franchising and other “innovative” ownership models. On that path, corporations take advantage of globalization, technological change and the racialization of poverty to weaken the bargaining power of many of us, including new and younger Canadians.

But there is a higher road: one that values and respects workers, and which rebalances power to ensure workers get a fair deal. Our government has a choice to make: stand on the sidelines as big corporations wield even more power in our economy, or side with working people and shift the balance to protect the majority of working Ontarians.

The Labour Council is proud to stand with CUPW and UFCW as they work to organize vulnerable gig economy workers. We celebrate the establishment of this important legal precedent which gives promise of fairer treatment, and call for it to be broadly applied to precarious workers in all sectors of the economy. If the Ford government is truly “for the people,” it must tighten the laws and provide effective penalties for employers who misclassify employees under both the Labour Relations Act and the Employment Standards Act.