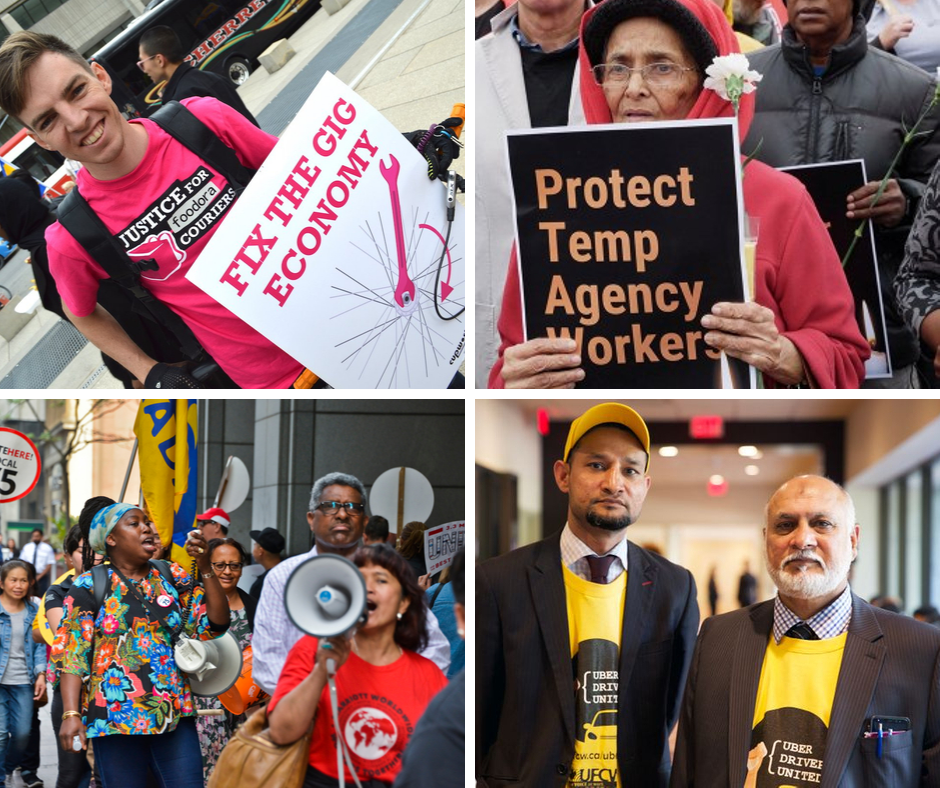 VICTORY! Read the story of the Foodora Couriers' big win at the OLRB!

In a changing economy, we need to be vigilant about how workers’ rights are impacted and eroded by policy loopholes and grey areas, especially when “disruptive” technologies enter the labour market.

The ever-evolving tech industry has brought in sweeping changes to how regular people live, work, and play in a very short time. Apps and online platforms provide a dynamic solution to the demand for things like vehicles for hire, short-term rentals, deliveries, and more.  However, these “disruptors” change more than our behavior; they have created an on-demand or “just in time” workforce that operates outside of existing workplace regulations.

Temp agency work, a classic type of gig work, is still a huge problem. Temporary employees are not covered under the same labour laws as permanent employees. Worse, temp agencies are notorious for being difficult to find and hold accountable - and the companies that hire through these third parties are able to take advantage of legal loopholes to exploit workers. The five temp worker deaths at Fiera Foods provide an unfortunate example of this reality (read coverage via Star reporter Sara Mojtehedzadeh).

This is known as the gig economy: work that is procured through a labour market mediated by a digital platform.  The gig economy operates in legal grey zones.  Workers have limited social and labour protections, and in fact, their classification as workers or employees is often in dispute.  Yet the size of the gig economy is growing in scope and in scale, all over the world.

It is difficult to get an accurate number of how many Canadians are employed through gig jobs.  Creators of these platforms would like us to think that users are primarily individuals who are supplementing their income, but increasingly, people are using them as a primary source of income.  Are these not workers?  Are these platforms, which profit from this work, not employers under the law?