We are only three weeks away from the launching of the Toronto & York Region Labour Council's brand new campaign, Labour 150, in commemoration of our 150th year anniversary.

The campaign launch, taking place on Monday April 12th, will feature the debut of our brand new Labour 150 website, a special live online gala, contests and much, much more. Running for a full twelve months, this celebration will capture how as a Labour Council, "Together We Did, Together We Can, Together We Will".

Join us on Monday April 12th for a celebration of our history, our victories and our path forward. 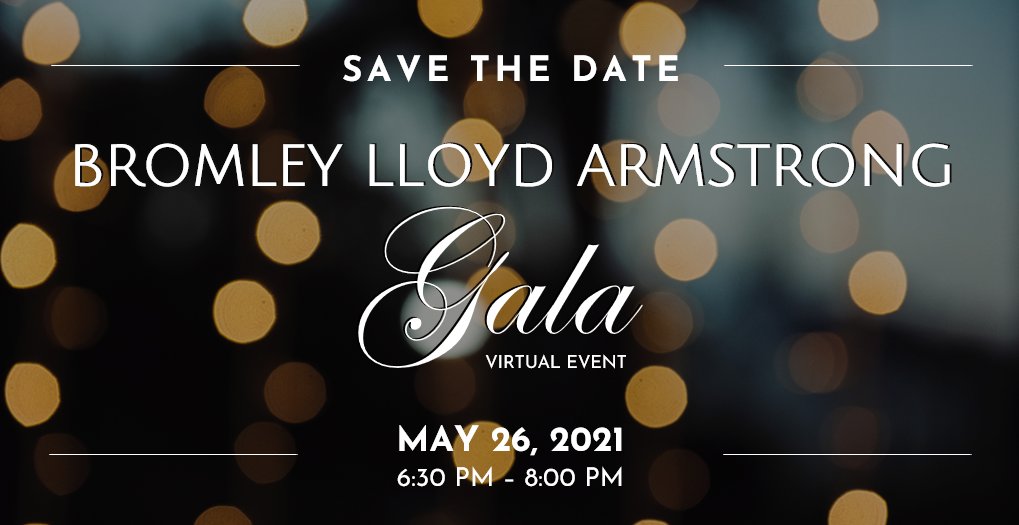 The last day to submit your Bromley L. Armstrong Award nominations is this Friday, March 26, 2021.The awards will be presented during the virtual Bromley Gala, a celebratory and inspiring evening, which will be held on May 26, 2021, 6:30 PM - 8:00 PM.

Click on the following links to complete the nomination forms and submit it to Sharon Simpson at [email protected] by March 26, 2021:

To find out more about Bromley Armstrong, please check out the following TYRLC Youtube videos: 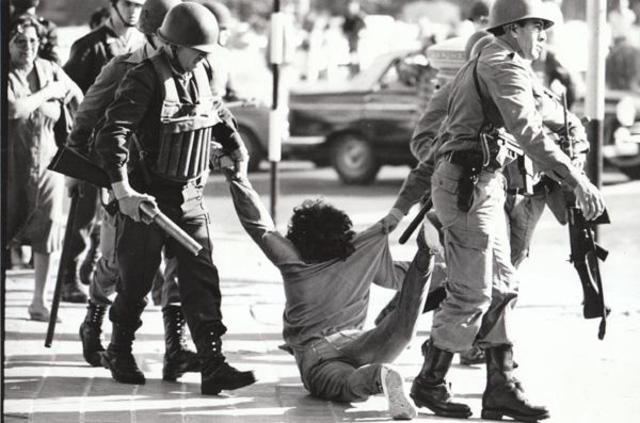 TWHP: TORONTO LABOUR SUPPORT TO THE STRUGGLE FOR DEMOCRACY IN ARGENTINA

In March 24, 1976, a dark cloud covered Argentina. The military took over the government, starting a brutal dictatorship, and a mounting terror campaign that ended with 30,000 labour and social activists disappearing.
Toronto and Canada were not oblivious to what was happening in the other end of the continent. The work of many here informed and educated unions, churches, social organization of what was taking place in Argentina. The Canadian labour solidarity was recognized later by the Argentinean democratic government. On Wednesday March 24th at 7:00 pm, a panel of people involved in mobilizing in solidarity with Argentina will share some of their experiences.

Panelists:
Beatriz Munarriz: Beatriz was born in Argentina, she is an anthropologist, moved to Canada in 1973 and worked in international development. She is now retired.

Don Lee: Don Lee worked for unions in Canada from 1972 to 2007. In 1979 he was Acting Director for Human Rights at the Ontario Federation of Labour. Don now works and lives in El Salvador documenting trade unionists killed during the civil war.

Enrique Tabak: Enrique Tabak, was a union member in Argentina until immigrated to Canada in 1974. In 1975, worked with other concerned Argentines in Toronto to form a Committee that would work against the human rights violations that were especially inflicted on working people. 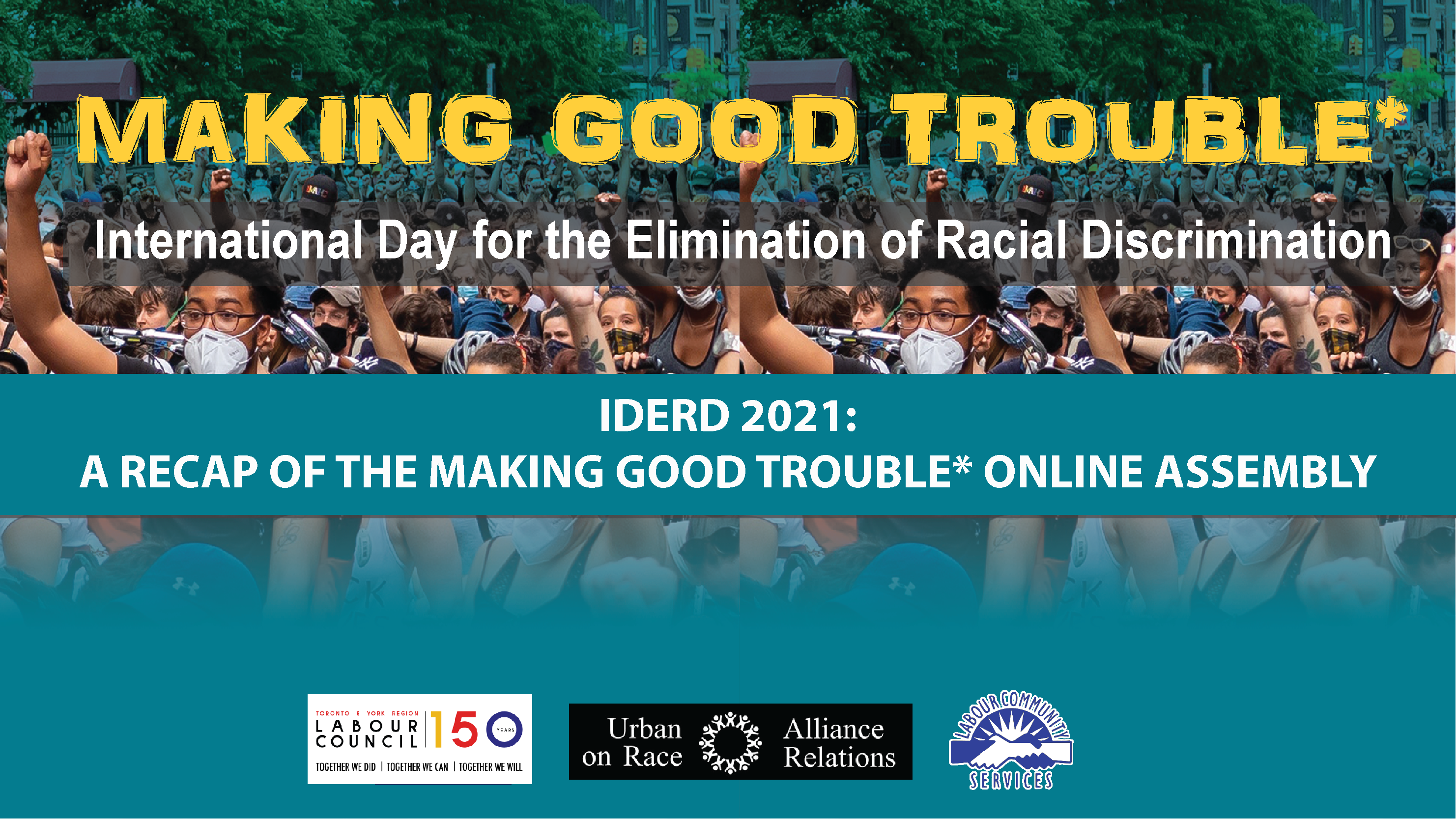 IDERD 2021: A RECAP OF THE MAKING GOOD TROUBLE* ONLINE ASSEMBLY

On Sunday March 21st, The Toronto & York Region Labour Council, Labour Community Services and the Urban Alliance on Race Relations hosted an online assembly to commemorate the International Day for the Elimination of Racial Discrimination (IDERD). Attended by over 200 participants, the assembly brought together creative artists, labour organizers and community advocates to discuss solutions for racial justice in our workplaces, our communities and our society as a whole.

The keynote discussion was moderated by Shad, musician and host of Netflix’s Emmy award winning docuseries Hip Hop Evolution and featured a discussion with Hassan Yussuff, the first racialized president of the Canadian Labour Congress and Bernie Farber, human rights advocate and chair of the Canadian Anti-Hate Network.

Since Sunday's event, the Canadian Anti-Hate Network has released the results of it's recent online poll on online hate & the Chinese Canadian National Council - For Social Justice have launched their Stop Online Hate campaign.

TORONTO STAR ARTICLE: HOW WE APPROACH THE TASK OF DISMANTLING SYSTEMIC RACISM

"The late and great civil rights leader, former United States Congress Rep. John Lewis, said it best: “Do not get lost in a sea of despair. Be hopeful, be optimistic. Our struggle is not the struggle of a day, a week, a month, or a year, it is the struggle of a lifetime.

“Never, ever be afraid to make some noise and get in good trouble, necessary trouble.”

"March 21 is the International Day for Elimination of Racial Discrimination (IDERD), marking the 1960 tragic massacre in Sharpeville, South Africa. There is no small irony in the fact that when South Africa’s Apartheid regime was designing its system of racial segregation, it studied the Canadian model of status cards and reservations created under the Indian Act."

GLOBE & MAIL ARTICLE: THE CARING ECONOMY IS THE CHOKEPOINT OF RECOVERY

Economist Armine Yalnizyan, Atkinson Fellow on the Future of Workers, examines the ongoing transformation of the economy, childcare, the caring economy & workers' rights in a post-pandemic world:

"Plenty of jobs won’t come back after we “reopen.” Not everyone who lost a job has children. But there is a policy-amenable strategy governments can use to lubricate recovery: child care. The problem is, not only are our elected representatives not communicating where things are at; there are no plans for improving things, or even simply optimizing existing capacity in schools or regulated child care centres – the parts of the system over which they have the most control.

It seems that Plan A and Plan B for most provinces, which are in charge of schooling and child care, is just to have women figure it out – and work harder in paid and unpaid jobs. How’s that been working for you? And by “you” I don’t just mean women. Fewer women in the paid labour force means less purchasing power and less business for everyone. How will that help recovery?"