The letter below was sent by organizations to the Executive Committee and Mayor John Tory on November 17, 2020. You can take action by sending a message to your Councillor here.

Re: Speed up the Surface Transit Network Plan Update

Dear Mayor John Tory and members of the Executive Committee,

Toronto has a historic opportunity to rapidly improve public transit by installing transit priority measures. It has never been more urgent to do so. 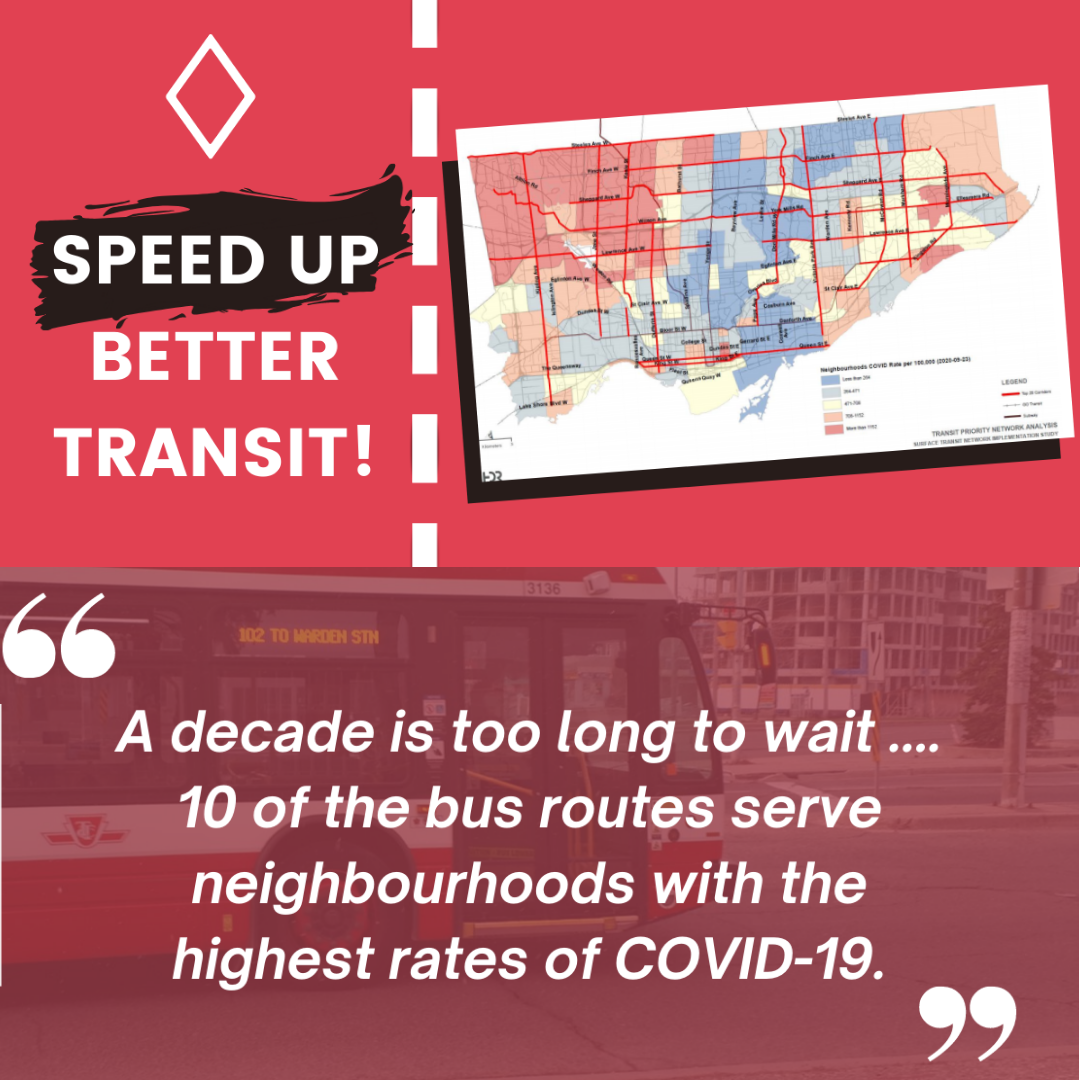 The Surface Transit Network Plan Update maps twenty transit corridors under consideration for priority measures. Ten of the bus routes serve neighbourhoods with the highest rates of COVID-19. Eight of the routes run through Toronto’s northwest, where more people of colour and Black residents live and depend on the TTC.

We commend the plan, but a decade is too long to wait for full implementation. In June 2021, Council is set to debate Jane Street bus lane plans, with no date set for installation. The next two transit priority measures are not scheduled until 2023. Yet this July, Council voted to commence public consultations about Dufferin Street “immediately.” The TTC Board voted to consider speeding up the implementation of four bus-only lanes in 2021.

The Toronto Office of Recovery and Rebuild (TORR) made several recommendations that support the acceleration of transit priority initiatives. Recommendation #59  is to “accelerate or make permanent transit initiatives the City undertook quickly to support crisis response and restart, such as instituting priority bus lanes.”

TORR Recommendation #25 argues that the needs of essential workers must be considered in recovery efforts, and notes: “the City can immediately contribute through such measures as increasing and accelerating installation of priority bus lanes thereby improving reliability and reducing commuting time.”

Toronto is lagging behind other North American cities. Vancouver is implementing four bus lanes this Fall on its most crowded routes. New York City and Boston are implementing bus lanes as a pandemic response.

We, the undersigned, urge you to take the following steps to speed up a more equitable and safe public transit system:

1.Speed up the Surface Network Transit Plan, prioritizing areas with high rates of COVID-19, which is disproportionately impacting Torontonians who are Black, people of colour, and with low incomes.

Crowding is an ongoing issue as bus ridership has returned to more than 50% of pre-pandemic levels. Bus-only lanes are an opportunity to dramatically increase service frequency, but the TTC has reduced the number of buses running on the RapidTO corridor Eglinton East. The TTC should release real-time crowding data and show where Run-As-Directed buses are deployed. As the Toronto Foundation has recently noted, potential future TTC service reductions “will hit low-income, nonwhite residents hardest, whose ridership is a necessity not a choice.”

Multi-modal transportation should be encouraged by: installing protected bicycle parking, such as bicycle lockers, at key RapidTO stops and by encouraging residents to cycle to RapidTO stops to reduce crowding on local and feeder buses.

The removal of mid-block bus stops on the Eglinton East RapidTO corridor is unacceptable to residents who are elderly, use mobility devices, or rely on the TTC to get groceries. This is a safety, equity, and accessibility issue: Scarborough has a higher proportion of pedestrian deaths than other areas, with poor snow and ice clearing at many of the removed stop locations.

(Video of a long-time resident at Markham and Eglinton explaining how local stop removal will impact residents who are seniors or who rely on the stop to get groceries.)

Riders are reporting a lack of compliance and improper use of masks. The TTC’s latest statistics show that only 86% of riders wear their masks properly. The TTC has taken the positive step of deploying teams to distribute masks on the bus network, but more is needed. Mask dispensers should be installed on buses. Fare inspector roles should be changed to hand out masks and ask riders to wear them. Effective, multilingual communication is needed to promote mask use.

The Surface Transit Network Plan will require $62 million in funding from 2021-2024 to study, plan, design, and implement surface transit projects. This funding will be requested during the 2021 City Budget process.

Improving public transit is critical to addressing climate change. In June 2020, Statistics Canada reported that three-quarters of previous transit users switched to personal motor vehicles during the pandemic. Only the expansion of affordable and accessible public transit will encourage people to leave their cars at home and reduce the greenhouse gases caused by transportation.

Good Jobs For All