The Labour Council approved its 2020-2022 Strategic Plan in November of 2019 after several months of careful consideration and consultation. The plan was developed with our current political realities and future labour battles in mind, as well as our Council's overarching commitment to social, economic, racial, and environmental justice. 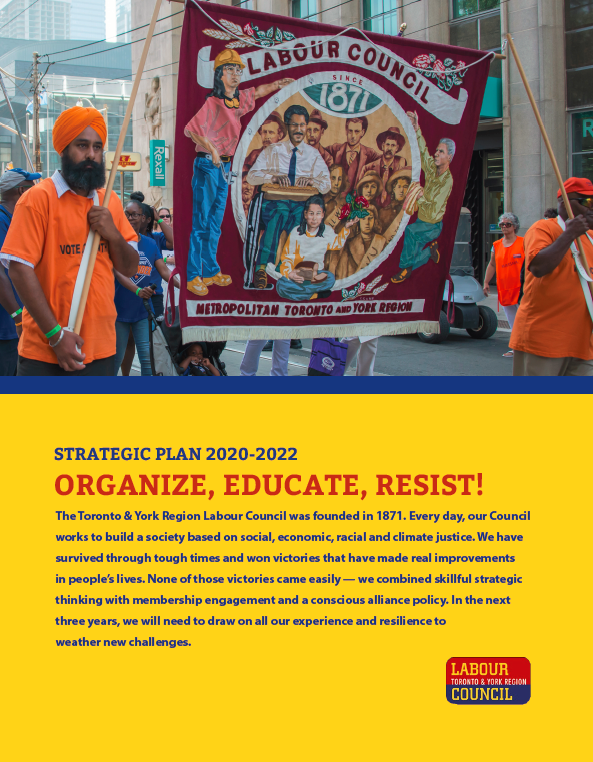 June 7, 2019, was the first anniversary of the Conservative party’s victory in Ontario.  Across much of the world, the rise of right-wing governments is deeply troubling, and threatens to reverse many of the gains that working people have made in recent decades. While Doug Ford’s rhetoric is cloaked in fake populism, it masks an objective that is just as revolutionary as the Harris regime of the past: to permanently change how our province functions. The corporate elites largely support “structural adjustment” to limit wages, privatize public services and assets, and open up commercialization of all aspects of society. But austerity measures always land hardest on vulnerable and marginalized communities.

While we win some battles, there will be further attempts to undermine labour rights while forcing municipalities, school boards, healthcare and social service agencies to share the dirty work of cutting programs and turning on their own employees. Labour must relentlessly challenge the rationale for austerity; there is ample money in the system if tax fairness were in place. Just by collecting taxes at the same rate today as in 2000, we would have an extra $56 billion a year that could be used to address urgent needs like child care, pharmacare, public transit, tuition fees and effective action on climate.

It is crucial to build a resistance movement that can challenge every element of this destructive agenda as it rolls out, in solidarity with each other’s fights, and not just wait for the next provincial election. We have already seen Ford’s government change course on some issues in the face of determine resistance. But it is also vital that labour has a clear vision for our country’s largest urban centre in the lead up to the next election. ORGANIZE, EDUCATE, RESIST! was the slogan of our movement in response to the Harris Conservatives. We must embrace and popularize that approach across York Region and in Toronto for the next three years.

Access the full strategic plan as a printable PDF here.