The Star Editorial: Racism in the workplace cannot be tolerated 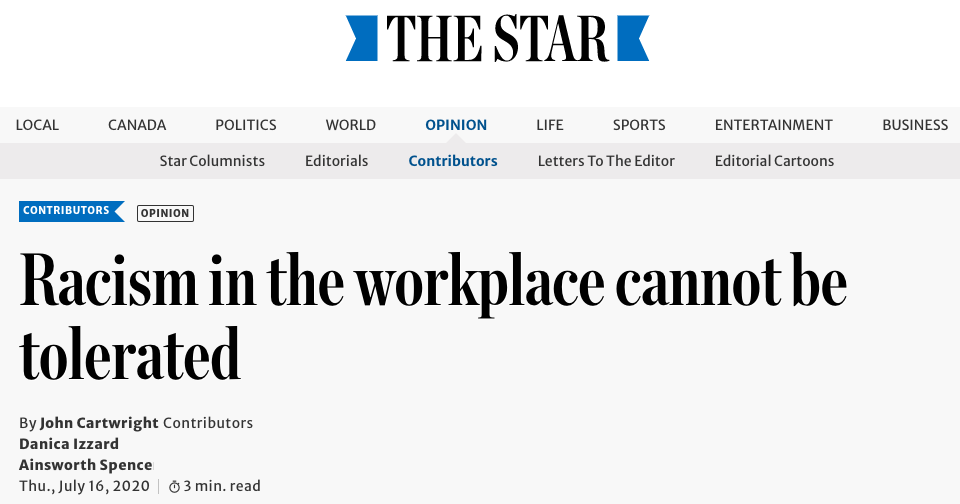 Toronto should be shocked by a series of hate crimes on three construction job sites in the city. Nooses were hung targeting Black workers as a sick reminder of the lynching of thousands of Black men in the United States. General contractors immediately called for a criminal investigation, while construction unions and communities rallied to challenge hate and affirm that Black Lives Matter.

Police are investigating these incidents, but it is not clear how effective they will be. On July 7, union and community groups held a demonstration in front of 55 Division police station to condemn the police failure to press charges after a brutal racialized assault on two local east end residents, both members of the Steelworkers Union. Only after that public expression of outrage were charges finally laid.

This dramatic evidence of escalating physical hate crime in our society must be immediately addressed. We are all called upon to condemn these actions and the deeply ingrained systemic racism that gives rise to them. Toronto has experienced this before — with neo-Nazi groups in the 1930s; the Western Guard formed in the 1960s, physical attacks on South Asian immigrants in the 1970s, the attempt of the Ku Klux Klan to set up a Toronto operation in the early 1980s, and most recently, extremist groups targeting the Muslim community, etc.

But it’s not just about high profile incidents. The lived experience of Black workers and families need to be listened to and reflected upon. Here in Toronto, there is a growing frustration of communities who feel that little has actually changed despite many promises of “transformation” or “reform.”

There is no simple answer to this deeply disturbing reality. Every person who holds power or authority in society — in government, in business, in workplaces, in the education system and in unions — is called upon to use their position to implement lasting change to ensure that human rights and anti-racist practices are embedded in the culture of every workplace and every community. Having a workforce that is representative of our communities, and welcoming to everyone, requires dismantling historic barriers as well as supporting equitable hiring programs.

Unions hold a special place in society. Our legitimacy as a voice of change comes from the hundreds of thousands of women and men, from all cultural backgrounds, in every sector of our economy, represented among our membership.

As a Labour Council, we have been a consistent organizing force fighting for equity and inclusion in Toronto for nearly 150 years. From undertaking campaigns for legislation and action against discrimination, we helped secure some of the first anti-discrimination legislation in North America, lobbied to end Canada’s deeply racist immigration policies, campaigned for Employment Equity, pushed for equitable public services, refugee rights, police accountability and helped establish the much-loved weekend.

We helped found the Urban Alliance on Race Relations and the United Way, and continue to support local community groups and activists pushing for human rights policies at work and in broader society.

Our recommendations build on decades of ongoing work that encompasses the lived experience of our members and their families, the knowledge of front-line workers, the lessons from dealing with political decision-makers and working with community allies, and the learning from both gains and setbacks.

Here are some steps that can be taken by those with power in our economy:

Our economy has been powered by skilled workers from Indigenous communities and generations of immigrants and refugees who have used their grit and determination to build Canada’s largest urban centre. Yet, in the face of systemic racism, much more remains to be done. It is up to all of us to help create a future where there is zero tolerance for racism in our society so that we can all continue to thrive, together.