Cargill. JBS. Chartwell. Southbridge. Foodora. These are just some of the names that stand out in the profiles of corporate greed brought to stark relief by the impact of COVID19. Cargill and JBS are meat-packing operations in Alberta and the epicentre of COVID infections within Canada’s workforce. 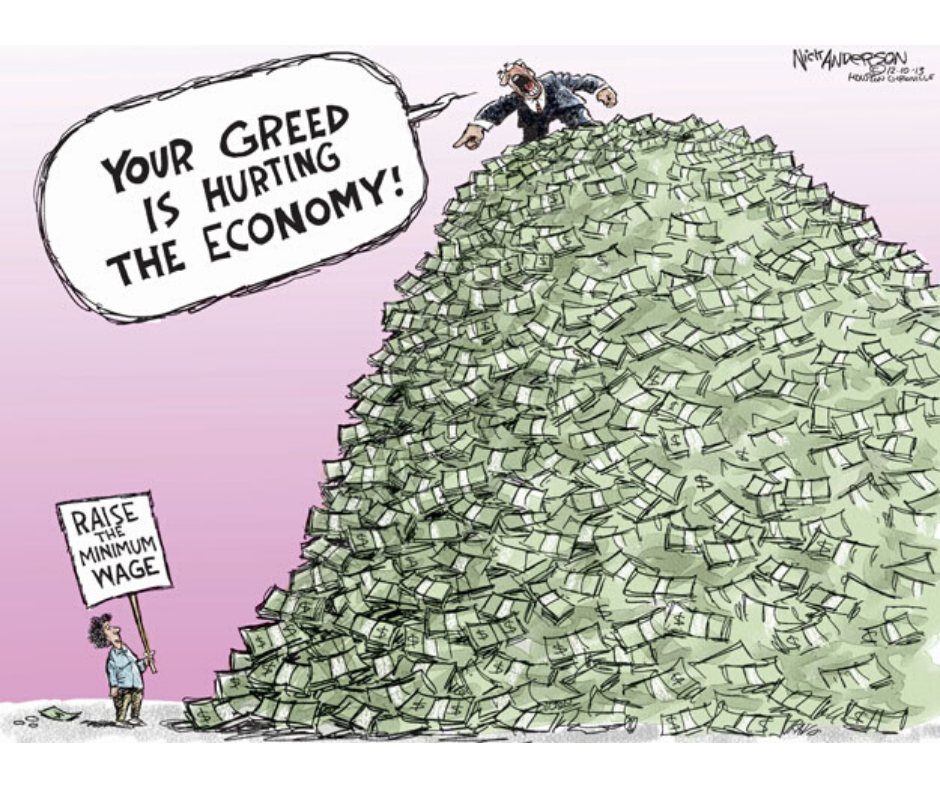 For American-owned Cargill and Brazilian owned JBS, the business model of concentrated production into massive plants powered by migrant workers has generated obscene profits for the last decade.

It is the logical consequence of a ruthless ideology of exploitation that was highlighted by Gainers Meat owner Peter Pocklington’s drive to bust the union in his Edmonton plant in 1986. The reorganization of the industry and takeovers by global multinationals has dramatically increased the pace of work and reliance on recent immigrants and temporary foreign workers. It took tough strikes to gain even a small degree of collective representation, but corporate arrogance abetted by the Jason Kenney government has taken its toll. Over a third of the workers in each plant is now infected.

There is a similar parallel in the world of long-term care in Ontario. The Mike Harris Conservatives drove a relentless agenda of privatization, using competitive bidding to undermine traditional non-profit delivery and opening up the entire sector to private chains. Today Harris is Chair of the Board of Chartwell, earning $237,000 a year for the part-time position, while its revenues have grown to over $900 million.  Southbridge owns two of the hardest-hit homes – Pinecrest and Orchard Villa. Its website boasts of its “acquisition strategy” that has seen it grow to 37 facilities, and “investor relations” - even as its staff have faced tragic shortages of Personal Protective Equipment.

Underneath the horror in long-term care lies the ideologies of privatization driven by the Conservatives, and “new public management” embraced by the McGuinty Liberals. Underfunding, weak standards, reliance on part-time positions, and the need to guarantee returns for shareholders all took their toll. But public outrage over the senseless deaths of residents, and the new-found recognition of the value of these “essential workers” may result in a profound change – if we mobilize to force an end to this flawed system.

As millions of workers stay home and the federal government pledges $250 Billion in bail-outs, new challenges are bringing out the best and worst in our society.  Newspaper ads hail the new heroes – healthcare workers, cleaners, grocery and food workers – and the delivery of everything from meals to consumer items has skyrocketed. Berlin-based Delivery Hero, the world’s leading food delivery platform, saw orders almost double to 239 million in the first quarter of 2020, with more than 3 million orders being delivered in a single day. But that did not stop them from announcing the shutdown and bankruptcy of their Canadian Foodora operation, while withholding taxes and WSIB payments.

For the past two years, Foodora workers have organized to win a union voice at work. Supported by CUPW, Foodsters United won a breakthrough decision at the Labour Board that clarifies their status as dependent contractors who can unionize. Weeks later the company shut the doors, leaving workers with nothing under Canada’s flawed bankruptcy rules. Foodora did the same in Australia when faced with a similar legal ruling. Its behaviour shows the absolute truth in the Foodsters rally chant: “Gig economy – same old crap, exploitation in an app!” Foodora should not be allowed to get away with this callous behaviour. There ought to be a law that guarantees fairness for every one of us.

Just as we salute the inherent courage of so many workers who put themselves at risk to keep our society going during these difficult times, so do we condemn the greed and immorality that is so central to the nature of 21st century capitalism.  For each of the stories described above, there are others to be told in every sector of the economy. We are reminded of the core reasons for the founding of our Labour Council so many years ago. Workers need power to win justice, no matter what kind of work we do. And we need solidarity and courage to build a better world.

View all past Labour Council statements