On Monday, September 2, over 20,000 union members will take to the streets in the annual Labour Day Parade. The 2019 theme “Organize, Educate, Resist!” was chosen to bolster worker solidarity in the face of the Ford government’s austerity agenda and to ready unions for the fights ahead.

“The first fifteen months of this Ford government have confirmed what we predicted: that the Conservatives would wreak havoc across the entire province, stripping workers’ rights, cutting programs and undermining the integrity of our education system and health services. Their record shows us why Canadians cannot risk having the Conservatives take power at the federal level,” says John Cartwright, President of the Toronto & York Region Labour Council.

“Ford may say that he is there ‘for the people,’ but his actions prove that he is really governing to benefit the 1 percent.  From transit to child care, legal aid to municipal elections, the Conservatives are making terrible decisions. They are sabotaging all efforts to address the climate emergency that faces humankind, while cutting taxes for the richest Ontarians. Our unions are committed to fighting against these regressive measures in every way possible. We are committed to building inclusive workplaces and communities, and challenging the politics of hate. Unions in greater Toronto have been working together for justice since 1871, and we are proud of what our members do every day to benefit all Canadians.”

This year’s parade will include workers who are organizing in sectors driven by the digital economy, including Foodora delivery workers and Uber drivers. The parade’s lead union is International Union of Operating Engineers Local 793, celebrating its 100th anniversary.

The Toronto Labour Day parade has been held by the Labour Council annually since 1872.  Labour Day has been officially recognized on the first Monday in September since 1894.  The Toronto & York Region Labour Council is a central labour body that combines the strength of local unions representing 200,000 women and men who work in every sector of the economy.

WHERE: The parade departs Queen St. W. at University Ave., heading west down to Dufferin and then south into the CNE grounds at Dufferin Gate. 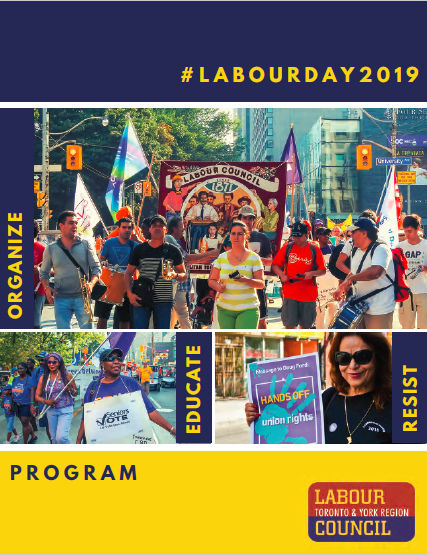