One year after the Ford government’s election, people want answers from Conservative MPPs

This week, people across Toronto and Ontario are taking action to put pressure on the Conservatives to reverse a series of unpopular cuts that have brought Premier Doug Ford’s popularity to record lows.  Activities across the region are shining a light on the issues.  Events include school walk-ins at over 300 schools on Thursday, “lunch and learn” events in workplaces and demonstrations in public spaces on Friday, and community canvasses in eleven Conservative ridings on Saturday. 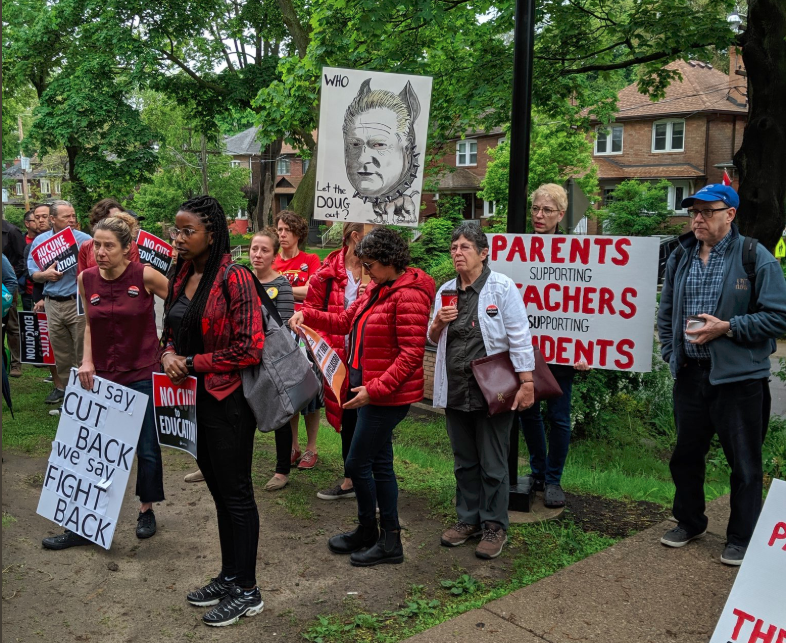 The events are part of ongoing grassroots efforts led by community- and labour-based organizations to inform and empower people to take action and influence government.  Toronto & York Region Labour Council, Progress Toronto, Urban Alliance on Race Relations, and the Campaign for Public Education are just a few groups who have organized locally, helping tens of thousands of people to make their voices heard.

“One year after the election, the people of this province are shocked with the poor decisions this government is making.  Taking away rights of temp agency workers, rolling back the minimum wage increase for over a million Ontarians and imposing reductions of real earnings of another million front-line workers—there is a pattern here.  It’s called abuse of power,” said John Cartwright, President of the Toronto & York Region Labour Council.  “Since the Conservatives never released a proper platform during last year’s election, most of their policies have been a complete surprise to Ontarians.  People did not vote for these cuts, or the undermining of democracy every day.”

Programs and services like education, child care, and public health are on the chopping block.  The province has reduced municipal representation while also putting policies in place to bypass local decision-making on issues such as transit and community planning.  These moves have caused a massive wave of discontent among the public, which is reflected in the government’s plunging approval ratings.

“Since his election one year ago, Doug Ford has been obsessed with dismantling Toronto, and every step of the way Progress Toronto has been helping tens of thousands of people push back against his cuts to public health, education, and transit,” said Erica Woods, Program and Operations Director at Progress Toronto.  “This Saturday, people will be knocking on doors in all 11 Conservative ridings in Toronto to help even more people call on the Province to stop the cuts and invest in our city.”

Zuo Jun (Echo) Han, an Early Childhood Educator and mother of two young children, has recently become active around the cuts to education in her riding of Scarborough—Agincourt.  “I have never been involved in politics before, but when I learned that my children’s education was at risk, I knew I couldn’t stay silent,” said Han.  “Education is very important to the Chinese community.  The international language program my daughter has attended is going to be cut.  I’ve talked to other parents who are upset and they want to know what they can do to stop the cuts.”

Just one year into their mandate, the government has announced widespread changes to our society without providing any roadmap for how those changes will be managed, let alone how they will improve the lives of Ontarians.

“The gap between the rich and the rest of us continues to grow under the policies of the Ford government, people are barely hanging on as he sweeps the rug from under us,” said Nigel Barriffe, President of the Urban Alliance on Race Relations and elementary school teacher.  “People in the communities I serve are worried that this government is leaving them behind—in the classroom, in the workplace, and in society.  For regular working class folks, Indigenous peoples and people of colour, newcomers, someone who relies on the bus and who works multiple jobs to make ends meet, these are scary times.”

The changes have immediate and lasting implications for millions of Ontarians living paycheque-to-paycheque.  An extra dollar an hour can be the difference in whether you get to eat this week.  A 15-minute delay in your commute could have repercussions at work.  A child care subsidy can make the difference between one salary or two—or none.

The June 7 and 8 days of action are an opportunity for people to exercise their civic right to ask their MPPs to answer their questions.  The public and members of the media are encouraged to follow along by attending one of the hundreds of events taking place (listed in appendix 1) or through social media using the hashtags #OneYearAfter and #AnswerTheQuestion.

The Toronto & York Region Labour Council represents over 200,000 members of affiliated unions.  Since 1871, the Labour Council has championed principles which improve the lives of its members and their communities. Today, we work for justice in our workplaces, in our politics, in our communities, and in our world.  Learn more: labourcouncil.ca

Progress Toronto advocates and organizes for a more democratic, socially just, and progressive city.  We take action on some of the biggest issues facing Toronto today, including housing, transit, affordability, and inequality.  Learn more: progresstoronto.ca

The Urban Alliance on Race Relations works primarily and proactively with the community, public and private sectors to provide educational programs and research, which are critical in addressing racism in society. Learn more: urbanalliance.ca

Campaign for Public Education strives to give voice to the city’s most marginalized communities, who are historically under-represented when decisions about education and lifelong learning are made.  Learn more: campaignforpubliceducation.ca